The oldest documented human presence in Ronda dates back to the Neolithic and early Copper Age (milleniums V – IV BC) with seasonal settlements located in the present district of La Ciudad (Old City). However, the human presence in these parts is much earlier. A sample of it, are the caves sites. Most famous amongst these is the Cave of the Pileta which is one of the best examples of Paleolithic cave art in Andalusia.

Aerial view of the ruins of Acinipo

According to some authors, the origins of Ronda are Celtic. In sixth century BC, they referred to Ronda as Arunda. Later the Phoenicians settled in a nearby village called Acinipo.

But Ronda itself was founded as a result of the Second Punic War, during the campaign that the Roman General Scipion held against the Carthaginians who dominated Hispania in the late third century BC. At that time, Scipion ordered to build the Castle of Laurel or Laurus, which later favored the settlements of the population around it. It obtained, in the time of Julius Caesar, the rank of city and its inhabitants and the neighboring Acinipo, the quality of Romans citizens. The ancient historians confused Ronda with Acinipo, hence Acinipo received the name Ronda la Vieja to differentiate it from the new Ronda.

With the Visigoths, Ronda became a small village and a vigilant post where troops were responsible for guarding the coasts of the Berber danger.

Muslim historians agree that Ronda originally had a castle and only a small village called Izna Rand Onda or just Onda that means City of the Castle. This castle was conquered in 711 by the Berbers. Ronda became a city soon that controlled a whole region. Southern Andalucia was divided into five Coras or Kuras and Ronda was the capital of Tacoronna.

With the disintegration of the Caliphate of Córdoba, the Cora of Takurunna became the Taifa of Ronda, an independent kingdom, and it was in this period when most of the monumental heritage was made in the old parts of Ronda and its districts.

The conquest of Ronda, by King Ferdinand, was vital for the further development of the latest campaigns in the Kingdom of Granada. The surrender of the town was held on Easter Holy Spirit, May 22, 1485. The conquest of Ronda was one of the greatest triumphs of the final War of Granada and represented a severe blow to Muslim power in Andalusia.

With the capture of the city by the Catholic Kings, a profound economic and cultural transformation took place.  This can still be appreciated by observing the structure of the urban space: Opening of previously unavailable spaces, widening of streets, etc.

The eighteenth century is the most important period of Ronda. The population continued extending itself towards the district of El Mercadillo, from the bottom to the top, moving to the flattest part of it. The city makes a great constructive impetus whose most notorious example is the construction of the new bridge that will communicate the two parts of the city, thus overcoming the most important obstacle for the city´s expansion.

Bandoleros in the Cueva del Gato

The romantic image of the city was forged, undoubtedly, during the nineteenth century with banditry and bullfighting making a strong impression on the minds of distinguished travelers. These two aspects have since then become symbolic of the culture and traditions of the area. Nevertheless, Ronda has a wealth of culture and tradition which goes beyond this over simplified image and it is in this diversity on which the present attractive of the city and the Serranía is based. 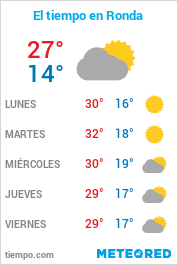